The Temple is a civilian building and must be built within the economic radius of a city. It increases the city's national borders, hit points, and attack range, essentially making it (much) harder to capture.

Without upgrade, a Temple increases the city's national borders by 2 tiles, its hit points by 25% and attack range by 1 tile. The Religion technology line available at the Temple increases the effects of all Temples. Bonuses on hit points are cumulative with the Carpentry technology line at the Lumber Mill. If the Temple of a city is destroyed or razed, its effects on the city vanish.

An upgraded Temple has a massive impact on the defensive capabilities of a city. With the second upgrade, becoming available with

Civic 4 (Divine Right), the hit points of a Temple's city are effectively doubled, increasing the hit points of a Large City from 2500 to 5000 (not taking into account other factors). So, from that point on it is more effective to first destroy the Temple before attacking the city center itself, as this reduces the total time required to bring the city down by nearly 1/4.

All Modern Age Temple types (gaining a concrete slab under them) 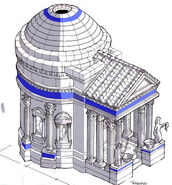 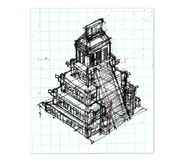 Pre-release versions of the game featured a new version of the Temple in the Industrial Age
Community content is available under CC-BY-SA unless otherwise noted.
Advertisement