Rise of Nations Wiki
Register
Don't have an account?
Sign In
Advertisement
in: Units, Standard Units, Civilians,
and 2 more

Deploy on a rare resource to provide its bonuses

The Merchant is a civilian unit used to collect rare resources to provide their benefits to the nation.

To gain the benefits of a rare resource, a Merchant needs to deploy next to it, thereby turning itself into a small "building" (it remains a unit, though, and takes damage like the mobile Merchant unit). Only one Merchant unit per nation is allowed to harvest a particular resource location. However, each nation may deploy its own Merchant next to a resource. Sending Merchants to rare resources located in friendly/allied territory is a common strategy.

The Merchant unit may also pack itself again and move on to another resource. This might be useful, if the current resource lands in enemy territory and the Merchant unit starts to take

attrition damage from it. Note that Supply technologies prevents

attrition damage in enemy territory while deployed for Merchants, since they are not moving. 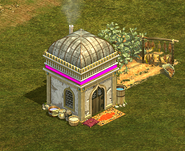 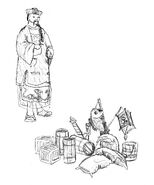 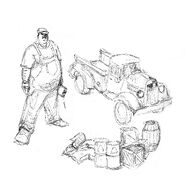 It is unknown why that icon ended up being unused in-game, but it's most likely an unintended error, considering the fact that in the game file unit_graphics.xml the correct values are present in the attributes of the assisting human models meant for the merchants from those Ages. But because the correct values are missing in the attributes of the means of transport models, the icon can never be seen in the game.

It's possible to fix this issue.

In the file unit_graphics.xml it's necessary to edit all the UNIT entries with their "name" attributes being:

For all those UNIT entries it's needed to change the values of their two specific attributes, so they would look like this:
tex_col="5" tex_row="0"

It would make the intended icon to appear in the game for the merchants during the Gunpowder and Enlightenment Ages. (Originally "tex_col" attribute is incorrectly set to 4.)

Community content is available under CC-BY-SA unless otherwise noted.
Advertisement