Offensive
The Japanese are one of the 18 nations in the original Rise of Nations. They have the Power of Honour, based on the emblematic warrior class of the Samurai and their strict code of honour, which deeply integrated into general Japanese society over the centuries.

The Japanese unique Heavy Infantry have +5 hit points, +1 attack strength, +1 armor, +3 turn speed, and 30 instead of 32 frames for attack recharge (meaning they attack faster). The additional armor means they survive longer against cities and towers, making them more useful for early rushes.

Ancient Age Hoplites have a 12% damage penalty against buildings, but the Ashigaru Spearmen do not have this penalty, making them significantly stronger against cities early on.

The Samurai have an attack recharge of 15 frames (twice as fast as the already-enhanced 30 frames of Japanese unique Heavy Infantry), but have a 50% damage penalty against units and buildings. Thus, they attack twice as fast but do only half as much damage per hit; however, this means that the defender's armor is effectively applied twice, compared with the usual attack rate and damage. 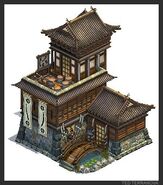 Art for a Japanese building that was not implemented.
Community content is available under CC-BY-SA unless otherwise noted.
Advertisement