The Granary increases the

Food production of all Farms in the city it is built in. It must be built within a city's economic radius and has two technology lines available for research:

Without upgrades, a Granary increases the

Food per 30 seconds. With the maximum of five Farms, the increase would be 10

Food. The Granary has no effect on the

Food production of the city center itself or on rare resources within the economic radius. 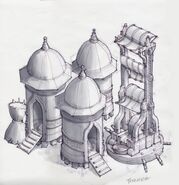